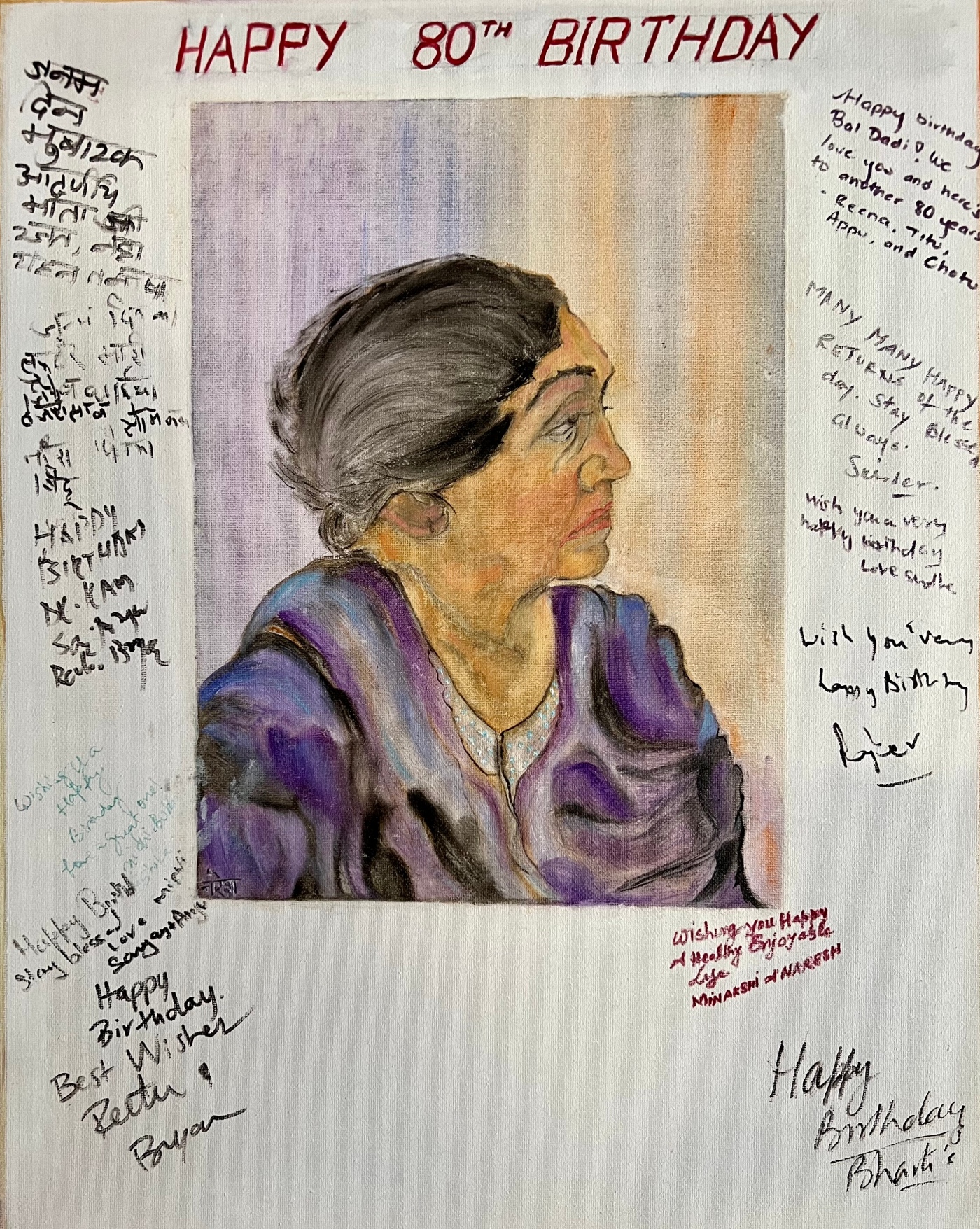 Over the centuries, The Banyan tree has taken on significance as a symbol of fertility, life and resurrection. It is a fitting symbol for ‘DesiStoriesAshaUSA’ which presents the stories of South Asians who have wandered far and wide from their ancestral homes, traversing new frontiers and setting down roots and networks in the US. Our goal is to connect and establish closer ties within the diasporas of the South Asian community and facilitate a dialogue with our readers, one story at a time. We will showcase stories of achievement and success and also resiliency and hope during the COVID pandemic.

Our story today features Santosh Jhanjee, and her inspiring journey of courage and firm resolve, aptly illustrated by her own words:

“When Goals are alive, the land feels like open sky”

“One Doesn’t need feet, but courage to fly high”

Santosh grew up in a traditional household in New Delhi, India and after an arranged marriage in 1968, and subsequent births of her two sons, happily fulfilled the roles of supportive wife and devoted mother.

Santosh gloried in everyday married life, celebrating festivals, and marking important milestones in her children’s lives such as the Mundana, the eighth of the Hindu Samskaras (purification ceremony) in which a child receives their first haircut.

Her American story began in 1985, as an immigrant to the US, when she arrived at her sister’s home in the Twin Cities, accompanied by her husband, two teenage sons, a heart full of confidence and firm resolve, and $20 in her purse!

Unlike many members of her family, Santosh had never desired a life in the US. However, when fate intervened, she felt tremendously blessed that she could give her sons the chance to pursue a different kind of success, in the country she had often heard referred to as the ‘land of opportunity’. For her boys, she was determined to pursue this dream at any cost.

And thirty-seven years later, it has turned out to be a fulfilling life with many highs and lows and bitter-sweet moments.

On the first day of arrival, the family dropped their luggage at her sister’s place, and immediately hit the streets to find employment. Though a large extended family offered assistance, her Indian upbringing would not allow her to accept help or be dependent on anybody.

”We had all decided that whatever work we can get, we will take it”.

Their perseverance paid off and soon her husband and older son, just 16, were working as dishwashers at Dayton’s and Scarpelli’s restaurants respectively. Their 15 year old also got an hourly job and life moved slowly on, with the kids going to school during the day and working at night. Three months after setting foot on American soil, they had earned enough to feel financially independent, and moved from her sister’s home to subsidized living. As soon as Santosh discovered a ‘Children’s Home Society Daycare’ in her housing complex, she secured employment, first, as an hourly on-call worker, with full time status soon after.

As the years went by, Santosh felt that though “life was picking up speed”, the pace was not fast enough for her. Her boys were at the University of Minnesota on full scholarships and her husband was working for the government in a good job. But, to Santosh “the destination was not even close yet“.

She wanted more for herself!

And, with ingenuity and determination she got it! Her younger son was wrapping up a summer job at Fairview Hospital’s corporate office and Santosh visualized taking his place when the summer was over.
This was a bold dream as everything, including the language was foreign to her. Apprehensive at first, she asked for and interviewed for his job. It was a courageous move but it paid off.

The work environment was new and strange at first: the phone system; unknown people; american english; transportation issues. Minnesota winters also presented a huge challenge. Commuting to work involved two bus connections, especially difficult in snow and thunderstorms. Slipping on icy streets resulted in broken bones but ”once I reached the office, I did not get up from my desk, even for lunch break or any other break”.

As time flew by, her confidence knew no bounds. Hard work, commitment and honesty resulted in promotions every six months. Her Supervisor Kim, and Director Judy became her staunchest supporters. Santosh’s joy was boundless when she received the ’Best Employee Award’ in 1991.

Santosh worked at Fairview for 25 years and and finally took retirement in 2010, as a fractured foot made her commute to work difficult, and she wanted to “enjoy life on her terms”.

Today, Santosh lives an independent life of peace and happiness. Though she insists on living alone after her husband passed away in 1999, she gets great solace from her daily meditations and prayers, family and close friends. She is a gracious and welcoming hostess, serving delicious homemade sweets and savories.

Santosh is a brilliant poet. She is the author of hundreds of poems written in Hindi, and scores of lined paper journals and promotional paper pads are a tribute to the talent and beauty of her verse.
She is up by 5am, and after her morning prayers, walks 8-10 miles a day in her apartment complex, mentally composing her beautiful verse. When she is back home 3 hours later, she pens her mental compositions on one of the countless paper journals readily available.

Her two sons have more than fulfilled Santosh’s hopes, dreams and ambitions. They are happily married to women from India and have blessed her with four grandchildren. At her grandson’s Mundana ceremony in 2001, the occasion evoked happy memories from her own son’s Mundana in India 29 years ago.

Her younger son Rajat, is a cardiologist in Atlanta. He started his career as an electrical engineer with undergraduate and graduate degrees from the University of Minnesota and UCLA, before enrolling in the University of Minnesota Medical school. He is the recipient of prestigious scholarships, and combines his engineering and medical skills towards cardiovascular applications.

Her older son Rajan, lives in the Twin Cities area and is an Orthopedic Surgeon. His background also includes degrees in electrical engineering with an emphasis on biomedical engineering from the University of Minnesota. He too is the recipient of many scholarships, and utilizes his engineering background in pioneering orthopedic applications.

Today, Santosh lives the American dream surrounded by a broad and extremely close knit network of family and friends, including her sisters whom she sees every week. She attributes her own family’s success to the tremendous support she received from her extended clan in the US, from the day she arrived at her sister’s home in 1985, ”without which we would not have been able to survive here”.

DISCUSSION : Our goal is to start a dialogue through the stories we present here. Please send us your thoughts and comments either by leaving a reply or posting a comment at the bottom of this blog, and/or sending an email to ’ashausastories@gmail.com’. We will collate all the feedback we receive and share back with you. (And let us know if you wish to remain anonymous).

A. What has been your evolution during your life journey in the US?

B. What life lessons/insights have you gleaned from Santosh’s story?

If you wish to submit your story for consideration, please send an outline with contact information to ’ashausastories@gmail.com’.

Please follow our blog ’DesiStoriesAshaUSA’ by entering your email at the ’follow’ prompt at the bottom of the page. You will be among the first to be notified when a new story is published.

AshaUSA’s mission is to provide culturally specific programs to the South Asian community to foster health and harmony in their lives. Please visit our website ‘ashausa.org’ for more information on our programs, volunteer opportunities and resources.

26 thoughts on “‘One doesn’t need feet, but courage to fly high’”